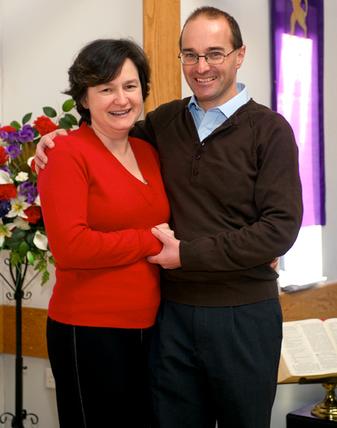 Graham is married to Suzanne and they have 4 children. They moved to Guildford in April 2008 following nine years spent in Wiltshire, where Graham served in the mid-Wilts United Area (Methodist/URC). Graham is also Minister at Emmanuel Church, Normandy and Wonersh URC.

I became a Christian... when I was 19, whilst studying Physics at Durham University. I'd had a very happy upbringing, but my family had little church contact. At university I met people to whom Jesus was a real, live person. He'd always seemed to me to have been a very good man, possibly even the Son of God. But he died, and his death (whilst heroic) seemed such a waste to me. My reading of the Bible suggested to me that God was someone who quite rightly asked much of us, but I didn't feel up to it. Whenever we had sung hymns at school, I always felt nervous and afraid. I was singing about something I knew I didn't believe, but which I was afraid might turn out to be true.

One day one of the students at college described how he believed he had been healed of a back complaint when a Christian man had prayed for him. It was the first time anyone had ever suggested to me that Jesus was able to do things now. I can't explain why, but his description of his healing hit me like a bolt from the blue. A few weeks later, in response to some questions I had asked, a speaker at a Christian Union meeting gave me a book, "The Day Death Died" by Michael Green. I spent all night reading it. Amongst other things the book explained that Jesus died on the cross not just to show us how much God loves us, but as a sacrifice for our sins. It had always seemed to me that Jesus' death on the cross denied the very things Christians claimed it showed - God's love and that Jesus was His Son. But the book said it wasn't just nails that held him to the cross, neither was it circumstance alone that led him there, it was love. He died not just to show us God's love, but as the sacrifice for my sins. When I read the word "sacrifice" I nearly wept. It was like a word of life to me. I knew that was what I needed.

The book went on to look at the resurrection. As a scientist I couldn't believe in miracles. People don't walk on water and dead men don't rise. I always thought that the accounts of healings and miracles were myths and fairy stories told about Jesus to encourage those who believed in him. I'd assumed that the best explanation for the resurrection was that the disciples stole his body in order for others to believe that Jesus was still with them. But going through the description the Bible gave of what they claimed they saw and what they went on to accomplish, it seemed to me that of all the possible explanations, them making it all up was the least (not the most)feasible. As a scientist, looking at the evidence, the only sensible explanation was that he had risen – I just couldn't see how.

Looking back, the real question for me was not "How did he rise?" but "Why did he die?" Once I could see that he had to die, to forgive me, I was ready to consider the possibility that he is who he said he was. It seemed a very big step for me, and I didn't feel up to it. But the real question was not whether I could believe in Jesus' death for me, but whether I would. I asked Jesus into my life. I have let him down so many times since, but he's never once deserted me.

In these last four or five years I believe the Lord has been encouraging me to be more open in sharing occasional words of knowledge and pictures with people. At New Wine 2006 during the prayer time following a talk on "going to all nations", we were asked to consider if there was a nation that the Lord wanted to place on our hearts. I wondered if the Lord was asking me to think about Africa. When I said this to him, almost mmediately I saw an outline map of a country in the East of Africa and when I asked "where?" I got the word "Kenya". I was convinced it was a map of Ethiopia. But the Lord said, "Kenya". I prayed about it - an Anglican friend had been out recently to the Sudan, and I wondered if there might be a possibility of going there. But rather than make too many enquiries myself, it seemed best just to hold it before the Lord. Nothing seemed to come of it. I'd almost forgotten it. But then in the Spring of 2007 another Anglican friend rang up to say she was leading a mission team overseas. She knew it was short notice and I'd probably say No. But she had one last place to fill, and praying about who she should ask on her team she believed the Lord wanted her to ask me. What continent? Africa. Which country? Kenya. I said yes. Just before I went, my wife got a children's book out of the library about Kenya to read to our youngest son. Reading to him, I was amazed to find at the back of the book the picture I had seen nine or more months before.

The Sunday before we flew out to Kenya we had a Service of commissioning in a local church for the five of us going from our town. At the end of the Service the leader of the Good News Church in the town came forward with a member of their church to pray for us. He believed that Alisdair would have a word for each of us. I was last in the line - Alisdair didn't know me from Adam. So I said to the Lord, "Go on, then. I'd like you to send me out to Kenya to share words of knowledge with the people; I want to grow in that gift. I don't mind; I'm happy for Alisdair to pray anything for me. But go on. Get him to pray that!" When Alisdair got to me he asked me what my name was, and then he said, "Graham, I believe the Lord is going to use you mightily in your preaching, in your preaching gift..." Then he stopped and paused. "No, not preaching," he said, "Sorry. I got that wrong. He's going to use you to speak words of knowledge to the people. Graham, I think the Lord wants you to be bold and courageous in sharing words of knowledge in Kenya. Don't be afraid to speak out and share what you see." Since then I have tried to be more faithful in speaking out those occasional words and pictures that the Spirit gives. I don't always get it right, but in prayer there have been times when I've shared a picture or a word with someone and in the Lord's goodness it has been spot on.